This week SpecMat is commencing a series of posts, which will fall under the rubric “Can Exchange Cause Change?”, to supplement our reading of Difference & Repetition as heterodox political economy (Deleuze’s Guidebook to Synthetic Finance). Its general aim will be to examine the ontological homologies between topology and finance. However, in the course of our thinking and research for these posts, we were listening to William Bolcom (Graceful Ghost Rag is my desert island song), then Jeff the Brotherhood, and then finally Tartini’s Devil’s Trill. Why do I say this? –perhaps I should let Tartini tell you.

Tartini tells us of his peculiar dream. Tartini relays that he dreamt he’d contracted with Devil, who’d now taken up residence at Tartini’s house as his servant. Smitten with the Devil’s diligence in his duties, Tartini lends the Devil his violin, who, Tartini implies, had never played before, but proved to be –as one can imagine– a very quick study: he played masterfully. This was all very surprising to Tartini, but proved unremarkable when compared to the profound beauty ‘of art and intelligence’ flowing forth from out of the Devil’s inaugural composition (in Tartini’s words: ‘ I felt enraptured, transported, enchanted’).

Tartini suddenly awakens from his dream.

Tartini leaps out of bed, and rushes over to his violin, in order that he might capture the Devil’s sonata before its non-extrinsic impression vanishes into the daylight.

Each composition by Tartini –actualized, extrinsic, concrete, and in its own right –is slightly different than the last, each will have been slightly different than the next; each individuated composition is marked by its own specificity in the actual, but always tied by birthright to a silent structure, that nonphenomenal but very real deep structure which is neither actual, i.e. not subject to the globality of demands made by the actual on its objects, nor is it potential, i.e. it is not subject to a probability distribution. Each of Tartini’s individuated versions of the Devil’s Trill is, of course, actual; and each, of course, will have been subject to a potentiality, which gets refracted through itself and then dumped out into actuality. But this singular sonata composed by the Devil –what is its ontological status if it is neither actual nor potential?

There must be some register of reality, some name, some term for this register by which we can refer to its singularity, its reality as an incorporeal effect of the material processes of Tartini’s dream. The term we give to the Devil’s singular sonata is ‘the virtual’.

In “Can Exchange Cause Change?” we will observe that and how topology also concerns itself with the virtual. So too obviously does Deleuze. But does finance? And if so, how do we go about thinking, talking about, and analyzing it? 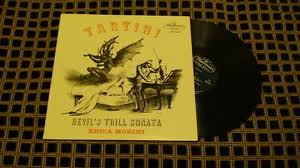 One thought on “N sonatas and their singularity: the Devil’s Trill”